Rose Rock Photography
Please visit our new website at www.roserockphotography.com We offer unique photography services where the focus is on a photojournalistic approach to our subjects. We like to capture moments as they happen so that our clients can treasure them for a lifetime! We take pride in offering a variety of photography services at INCREDIBLY competetive prices! We look forward to capturing those unforgetable moments with you! If you have any questions, please contact us at roserockphotography@gmail.com or 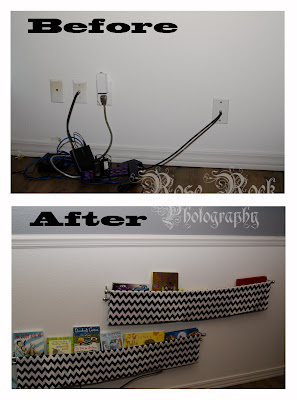 Ok...so I've seen these "book shelves" all over Pinterest...thought that Corbin needed one in his nursery (not to mention we have the router, cable hookup, and other things that needed to be covered). So, I set out to make one for him!

I got the idea from here: http://www.icanteachmychild.com/2010/10/make-it-no-sew-hanging-bookshelf/

Here is how I went about it...

Let me preface this post with I DO NOT SEW!!!
For mine I just went to Hobby Lobby and purchased one yard of fabric. I opened it up and hemmed the two selvaged edges first. Then I cut the piece into 2 half-yard pieces. Next, I put my rod on the fabric to see how big the opening needed to be for it and pinned the fabric along that side. (note: the pattern in the fabric made straight folds and seams MUCH easier) Then repeat that process for the other end of that piece and then both ends of the other piece. The directions that I read on the "idea post" called for a "double cafė rod" But even at walmart they were $17+ each...so I bought 4 cheap single cafe rods at $2+ each and bought 2 sets of additional brackets that stood out from the wall farther and mounted the longer ones directly on top of the shorter ones that came with the rods...then put your rods through the openings and hook them into the brackets! And there you go!! SUPER easy and a breakdown of the total cost of everything is as follows: